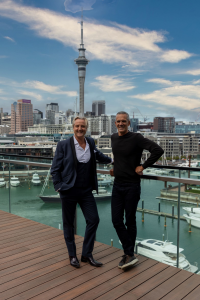 Enjoy a very exclusive evening of music and food this July featuring celebrated tenor Geoff Sewell, and celebrity chef and leading restaurateur Josh Emett, and be treated to a night that promises to tantalise the senses at Auckland’s luxurious Park Hyatt.

On arrival, guests will be greeted with champagne and canapés before the multi-platinum-selling Geoff Sewell performs a repertoire of beloved classics, including Nessun Dorma, O Sole Mio, How Great Thou Art and You'll Never Walk Alone.

This will be followed by a refined dining experience where favourite Kiwi chef Josh Emett will showcase Auckland’s finest local produce, matched with some of NZ’s best wines.

Also included in this five star experience is one nights’ accommodation at the lavish Park Hyatt on Auckland’s waterfront, and an indulgent breakfast the following morning in the hotel’s signature restaurant, Onemata.

This unique event is limited to just 80 special guests. Get in quick to secure an early bird ticket for $1,195 per person twin share, or $1,375 per person single occupancy.

On sale now - for more information and bookings, visit www.fortisevents.co.nz/soundbites

The inaugural Sound Bites event is part of the Elemental AKL 2021 Festival.

Kiwi tenor Geoff Sewell is a multi-platinum selling international recording artist and co-creator of the world's first 'pop-opera', classical crossover band Amici Forever. Geoff has two number one albums with Amici, as well as a third with his solo debut “Believe” which reached over 3.5 million album sales worldwide. Geoff has toured widely in New Zealand and abroad, and has sung for the Queen and other members of the Royal Family at The Royal Albert Hall, Windsor Castle and other venues; Nelson Mandela; and various celebrities including Sir Elton John.

Geoff is the Global CEO and co-founder of entertainment company Incognito Artists, based in London with offices in New York and Auckland. Geoff returned to New Zealand in March 2020 after his US tour was cut short due to Covid-19. He is currently based in Auckland with his wife Simone and two teenage daughters.

Josh Emett has been a chef for 30 years and his pedigree comes with impeccable credentials, having worked in London, New York, Los Angeles and Melbourne for Gordon Ramsay. In New Zealand he became a well-known face on television as a MasterChef New Zealand judge.

He is co-owner of Onslow restaurant in Auckland and The Oyster Inn on Waiheke Island with his wife Helen. He is the co-founder of Rata restaurant in Queenstown and restaurant chain Go-To Collection that includes Madam Woo and Hawker and Roll.

ABOUT THE PARK HYATT AUCKLAND

Park Hyatt Auckland is perfectly located on the water’s edge in Auckland and offers expansive views across Wynyard Quarter and out to the Waitematā Harbour. This sophisticated waterfront hotel opened in late 2020 and has 195 guestrooms, four restaurants and bars, a day spa, a 25-metre infinity pool, and a full fitness center. A luxurious, 5-star stay awaits guests.